Trent Station was opened by the Midland Railway in May 1862 solely as an interchange station.  It was not designed to serve any local community, and for this reason it is the only station in England named after a river, rather than after a town or village.

It was built on what would now be called a greenfield site, in the south-east corner of Derbyshire.  It was described in one Midland Railway publication as “the junction for everywhere”.

It changed little in its 106 years of existence, and even to its last day, December 31, 1967, was lit by gas lamps, never having had electricity.  It was built in the Midland Gothic style, and poet laureate John Betjeman was one of those who deplored its demolition.  Over each platform there was an impressive array of 27 glass canopy sections.

It had a complicated arrangement of loops, so trains with the same destination standing on adjacent platforms could be facing in opposite directions. 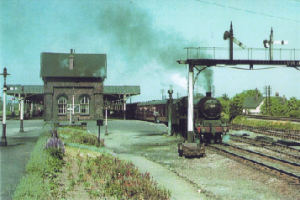 Although Trent Station was closed and demolished by British Railways in January 1968, it is still fondly remembered by many people.  Renewed interest in the station was sparked by the publication of the book Last Train from Trent Station by Geoffrey Kingscott.  This immediately stirred memories, and because so many people want to know about the station, it was decided to create this dedicated website.